Apple’s new 16in MacBook Pro is bigger and heavier, but that’s a very good thing, with the largest battery you can have in a laptop and a new keyboard that looks to kick the troubles of the past few years to the kerb.

It’s a bit of a U-turn from Apple and demonstrates that the Californian tech firm is finally listening to its hardcore audience: the professionals.

The 16in MacBook Pro is the largest, most expensive laptop that Apple makes and is a direct replacement for the 15in MacBook Pro that was made up until November 2019. Starting at £2,399 and reaching £5,769 with all the options ticked, it’s clear this is no ordinary computer for general users.

This is a machine is designed for developers, video editors, sound engineers and other people working in industries that demand power and performance for as long as possible.

But there are two new things that might interest general buyers as a preview of what’s likely to come to Apple’s other laptops that are more suitable general computers: a new keyboard and a new battery. 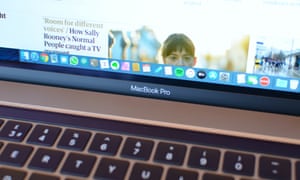 The design remains broadly the same, despite being larger with some important tweaks to crucial parts. Photograph: Samuel Gibbs/The Guardian

Fundamentally the design of the MacBook Pro hasn’t changed much since the introduction of the fourth-generation machine in late 2016. From the outside it looks practically identical, except it’s ever-so-slightly bigger than the 15in MacBook Pro.

This fifth-generation machine is 8.6mm wider, 5.2mm deeper, 0.7mm thicker and 170g heavier than the old version, increasing the screen size from 15.4in to a round 16in on the diagonal. It has the same four Thunderbolt 3 ports and still has a headphone socket. The keyboard has different mechanisms under the keys but is otherwise very similar, as is the gigantic trackpad. Apple makes the best trackpads in the business and this one is no different.

On the audio front the speakers and mics have been upgraded. The machine now comes with a six-speaker system built into it, which are still laptop speakers and won’t replace a set of headphones or a dedicated sound system, but sound phenomenal for what they are.

A three-mic array is capable of beamforming, cancelling background noise and is of high-enough quality that you don’t necessarily need to reach for a dedicated microphone for impromptu recording sessions. 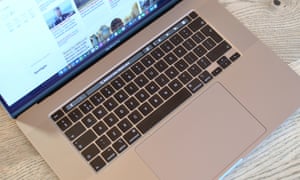 The Magic keyboard is great, and hopefully will be free of issues from Apple’s butterfly keyboard. Photograph: Samuel Gibbs/The Guardian

Much has been written about Apple’s recent laptop keyboards. The butterfly keyboard introduced with the 2015 MacBook was thinner, crisper, louder and with only a small amount of travel. I quite liked it, but it was plagued with failures due to dust getting under the keys and stopping them from depressing.

The 16in MacBook Pro has a new “magic keyboard” that moves back to the traditional scissor switches used by older Apple laptops and practically every other manufacturer. The keys are more stable and the travel is slightly shallower than Apple’s pre-butterfly keyboards, arriving at a nice combination of the best bits of the butterfly and scissor-switch keyboards.

Most will like the feel. It’s stable and has enough travel. It’s also easier to repair, so while it shouldn’t suffer from the same dust issues plaguing the butterfly keyboard, at least it should be easier to fix if something goes wrong. 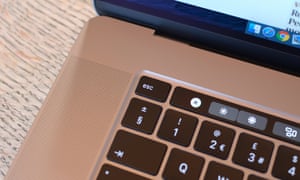 Apple has also added a dedicated ESC key in the top left, which is separated from the Touch Bar. This is something developers in particular have asked for and was a welcome addition for the Guardian’s developers’ team.

The direction arrows are now back in an inverted T arrangement, too, which was a frequent request. The Touch ID fingerprint scanner has also been separated from the Touch Bar, which led to far fewer accidental triggers of Siri – the first key by default on the Touch Bar – when I attempted to authenticate something with my fingerprint. 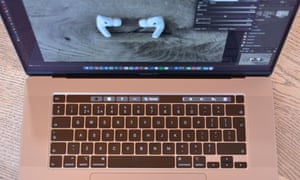 The Touch Bar continues to be as useful or not depending on the software you have to use, with most tools available through it in Affinity Photo, for instance. Photograph: Samuel Gibbs/The Guardian

The screen is marginally bigger at 16in on the diagonal rather than 15.4in, although you can only really tell side by side. The display has a higher resolution, which provides slightly more screen real estate in use, as well as being slightly crisper on paper with a density of 226 pixels per inch (up from 220ppi).

On the whole it’s one of the nicest displays I’ve used on a laptop. Rich, bright, easy to use in most lighting conditions, it is individually calibrated at the factory and it has a mode that simulates high dynamic range. But it is not a true HDR display nor is it 4K, which may be an issue for those looking to work with content in both although most will likely transition to an dedicated edit suite for serious work. The MacBook Pro does support output to up to two 6K or four 4K displays simultaneously, for those who use this as their sole machine working at a desk. 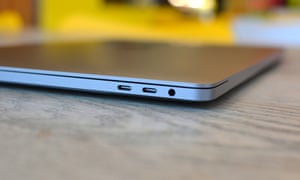 The port selection remains the same, but USB-C/Thunderbolt 3 is a powerful, useful tool that can replace practically everything else fairly easily. Photograph: Samuel Gibbs/The Guardian

Other than the slightly bigger screen and marginally thicker keyboard, the majority of the increased weight and thickness of the 16in MacBook Pro is down to its significantly larger battery.

There’s a cap on the size of battery allowed on a flight of 100Wh and that’s what Apple has fitted here, just shy of a 20% increase from the 83.6Wh battery in the previous generation machine. Battery life on a machine like this entirely depends on what you’re using for.

The laptop would manage a full nine-hour work day of writing, browser tabs, image editing and a suite of chat apps, both work and personal open, with the screen set to 75% brightness on battery power with about 10% left.

But you’re looking more like a few hours of video editing, which is more than enough for quick adjustments in the field in between connections to a power socket. The larger battery was welcomed by the Guardian’s video team, who said the increased weight was negligible in the grand scheme of things. 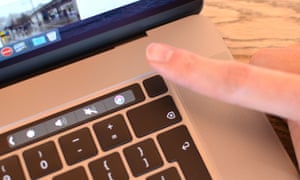 The Touch ID button is now separate from the Touch Bar, meaning it’s much easier to find without looking. Photograph: Samuel Gibbs/The Guardian

If you were looking for a new Mac laptop as a workstation, but were put off buying one because of the troubles with the keyboard, or that it just didn’t last long enough to get whatever you needed to done in the field, the 16in MacBook Pro is the answer.

Aside from the new keyboard, it’s clear Apple has listened to at least a few requests from power users. The escape key is back by popular demand, as is the T-shaped layout of the arrow keys, while a separated power/Touch ID button is much more user friendly. You can even fix some things without fully dismantling the machine, which is a step forward.

There’s still no SD card slot or any port option not USB-C but by now most will have hubs, dongles or new replacement cables for the necessary things.

The 16in MacBook Pro is most certainly not the laptop for general users who just want a big screen – the price alone should be able to tell you that. But if you know you need this sort of capability, then the MacBook Pro is in a similar price bracket to competitors and can be specified with a frankly absurd amount of capacity, which might make the difference.

The first of the fifth-generation MacBook Pros is a return to form for Apple, and bodes well for further refreshes of the company’s slightly more affordable laptop lines expected in the near future.

Cons: fairly heavy for some, no card slot or legacy ports, no user-serviceable RAM or storage, no Face ID 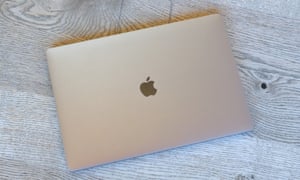 When shut, the 16in MacBook Pro simply looks like a bigger version of practically every Apple laptop released since 2015. Photograph: Samuel Gibbs/The Guardian

TikTok was the most downloaded iOS app in April

Epic Games vs Apple trial: Here are all the latest developments so far – The…