AirPods Pro review: a touch of Apple magic – The Guardian

Apple’s true wireless earbuds have gone “pro” and in doing so deliver on the promise of the 2017 originals. The new AirPods Pro are worth the wait.

Apple managed two pieces of magic in 2017 with the original £159 AirPods. They just worked without the skips, blips or audio delay, and came in a tiny battery case that kept them charged and safe – a combination that competitors still find hard to match.

But they had one big problem: no isolation from the outside world. It meant that in any noisy environment you struggled to hear your music. 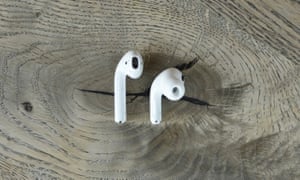 The look, feel and operation of the AirPods Pro will be familiar to anyone who has seen or used the original AirPods. Small white earbuds replete with stalks and a small flip-top white case into which they snap to store and charge.

The stalks are a little smaller and have a squeezable control surface on them. But the biggest difference is the little silicone earbud tip that helps to block out noise.

In true Apple fashion the ear tips aren’t standard – replacements cost $4 per pair in the US but the UK cost is currently unknown. You get three sizes in the box and they are easy enough to swap between but hard to pull off by accident. There’s also a fit test on the iPhone that detects if you’ve got the correct size earbud with a good seal.

At 5.4g per earbud the AirPods Pro are 1.4g heavier than the AirPods but still light and well balanced. Once inserted the AirPods Pro are some of the most comfortable and secure-fitting true wireless earbuds available rivalling Samsung’s Galaxy Buds and Libratone Track Air+ on that front. Put them in and as long as you don’t brush the stalks you’ll forget there there. 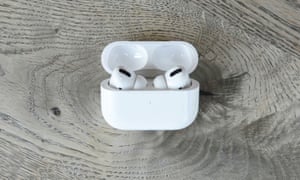 The top of the case flips open to reveal the earbuds held in place by magnets. Photograph: Samuel Gibbs/The Guardian

The charging case is a smidgen bigger and heavier than that of the AirPods, but that still makes it one of the smallest and best available. It fits in the money pocket of your jeans, holds the AirPods Pro tightly and the lid closes with a satisfying snap.

The case charges via Qi wireless charging or Apple’s proprietary Lightning cable. The AirPods Pro offer more than four hours of continuous listening with noise cancelling active and charge in the case about five times, with a total play time of more than 24 hours.

While good, rivals such as the Track Air+ last for about six hours between charges with noise cancelling on. Four hours is certainly good enough for general wearing and commuting but not for long-haul flights. 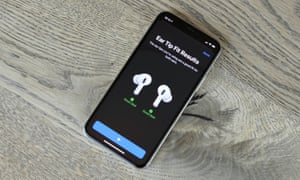 There’s a fit test on the iPhone that uses the microphones within the earbuds to make sure you have a good seal with the silicone tips. Photograph: Samuel Gibbs/The Guardian

Pairing is just as easy as previous versions of the AirPods. With an iPhone or iPad all you have to do is open them near the device and follow the instructions. The pairing information is then synced between all your Apple devices using iCloud, so you can seamlessly switch between an iPhone, Apple Watch, iPad, Mac or even Apple TV.

They work well with non-Apple devices too, supporting the Bluetooth 5.0 standard or earlier revisions. With the earbuds in the open case, press the button on the back to pair them with anything else such as a Windows PC or Android device. But you need an Apple device to change settings and update the earbuds.

The AirPods Pro have the same H1 chip as the AirPods 2 and Beats PowerBeats Pro, and as such have similar bullet-proof, lag-free connectivity and the ability to share audio with other H1-supporting devices meaning two people can listen to one iPhone, iPad or Apple TV.

New for the AirPods Pro is a pressure-detecting surface on the stalks. Squeeze the pad, rather than tap or swipe, once for pause, twice for skip forward or thrice to skip back. What felt odd to start with coming from the swipes and taps of other earbuds quickly became second nature. 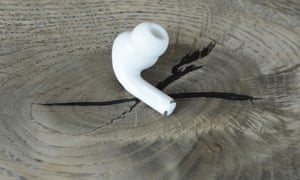 The short stalk has a pressure-sensitive strip on the inside edge for controlling playback and noise cancelling. Photograph: Samuel Gibbs/The Guardian

Squeeze and hold to either activate Siri or switch between noise control modes. By default that’s straight from active noise cancelling to ambient listening mode, which lets in sound so you can hear announcements, but you can also turn both systems off too if you’d prefer.

Take one out and the music pauses (if used with an Apple device), put it back in to start again. The only thing missing is volume control, which is a shame. Apple’s voice assistant can also listen out for its “Hey Siri” wake-word via an iPhone and Siri can read out texts and iMessages, but not WhatsApps or other notifications for now.

Settings and the fit test can be reached in the Bluetooth settings on an Apple device. But you can also switch between noise control modes in Control Centre on an iPhone or iPad by long pressing on the volume control. 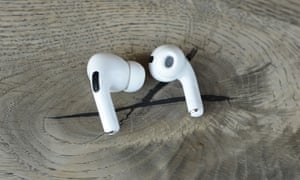 Having a good seal with silicone tips immediately improve the sound quality of the AirPods Pro. Photograph: Samuel Gibbs/The Guardian

The AirPods Pro are a step up in audio quality for Apple’s own-brand headphones, which isn’t a surprise as a good seal in the ear works wonders for full reproduction of sound. The earbuds produce tightly controlled, well-balanced highs and mids, with enough punch in the low end to produce a nice, rounded sound at pretty much any volume.

They make a good go of most music genres, but those looking for real thumping basslines or who enjoy the raw energy of a thrashing guitar will have to look elsewhere. There’s no equaliser either.

As such AirPods Pro sound good – but you’re not going to be discovering new nuances in your most-loved tracks in quite the same way you might with the very best-sounding headphones such as Sony’s WF-1000XM3 or Sennheiser’s Momentum True Wireless. 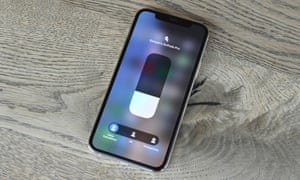 Long-press on the volume control in Control Center on the iPhone to quickly adjust noise control settings from your phone. Photograph: Samuel Gibbs/The Guardian

The active noise cancelling on the AirPods Pro is surprisingly effective at reducing most background noise. It handled the majority of the day-to-day commute noise very well, and even stood up to engine drone on a long-haul flight. They weren’t quite as noise deadening as the excellent Sony WF-1000XM3 earbuds or full-size Bose Noise Cancelling Headphones 700 letting a little more chatter through, but they also weren’t miles off, which is remarkable given how tiny the AirPods Pro are in comparison.

They also handle wind noise very well, which is something Sony’s earbuds and many noise-cancelling over-ear headphones struggle with. Even when it’s blowing a gale you can still clearly hear your music.

Call quality was excellent, minimising background noise and coming across clearly to the other end of the call. But the AirPods Pro lack any sidetone, which is the ability to hear yourself in the call, making it hard to know whether you’re shouting. 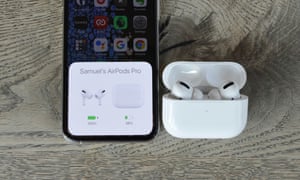 Apple will allow you to swap individual earbuds or the case when the battery wears out, but the devices themselves are not repairable. Photograph: Samuel Gibbs/The Guardian

As well as the AirPods Pro work, they suffer from the same issue as any true wireless earbuds available at the moment. The case and each earbud has a non-replaceable battery that will eventually wear out. Repair gurus iFixit recently gave the AirPods Pro a repairability score of zero. Apple only offers full replacements, not repairs, which makes the AirPods Pro disposable.

The same could be said of many wireless headphones, but also for most earphones that do not have replaceable cables, which frequently break and then are simply thrown away. All of which has an environmental cost worth considering.

The AirPods Pro are a triumph for Apple. They’re small, comfortable, last long enough for most listening sessions, slot into an unrivalled truly-pocketable case and – finally – offer not only proper noise isolation thanks to silicone tips, but also surprisingly effective active noise cancellation.

They have the same magic that makes the standard AirPods effortless to use, particularly with Apple’s devices. They simply work, even with Android or Windows machines.

Sure, they’re expensive, and they don’t quite reach the exquisite audio highs of Sony’s WF-1000XM3 while letting a little more chatter through the noise cancelling. But they’re tiny by comparison, more comfortable to wear and have a case you can fit in the money pocket of your jeans – a convenience that simply can’t be underestimated.

The biggest issue you might face with the AirPods Pro is actually getting hold of a set, as of the time of writing they’re sold out until January.

Cons: expensive, no on-earbud volume control, no settings on Android/Windows, not repairable, stalks, only available in white 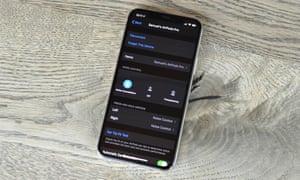 Customisation options for the AirPods Pro are under the Bluetooth settings menu on iPhone. Photograph: Samuel Gibbs/The Guardian

iPhone: The Next Generations! [Cult of Mac Magazine 391]

Today in Apple history: Devs get the key to unlock iPhone’s awesome power