Apple’s latest MacBook Air has a new, fixed and more satisfying keyboard, improved processors and gets a price drop.

From the outside essentially nothing has changed. The new 2020 MacBook Air looks just like the revamped machine launched in 2018, except it costs £200 less than its predecessor, with the base model starting at £999.

In a world filled with convertibles, 2-in-1s and fancy tablet computers, the MacBook Air stands apart as an attractive design that is the pinnacle of the traditional laptop form. An instant classic. 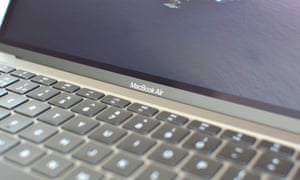 If you had a pair of callipers you might be able to tell that the new MacBook Air is 0.5mm thicker and 40g heavier than the old one, but there’s a good reason for that: a new keyboard that’s just a smidgen thicker. More on that in a moment.

The 13.3in screen is crisp and beautiful, now supporting Apple’s True Tone technology, which adjusts the screens colours depending on ambient light. It was a feature restricted to the MacBook Pro in Apple’s laptop line until now.

The 1.29kg MacBook Air compares favourably with rivals, but is heavier than tablet PCs such as Microsoft’s 775g Surface Pro 7 (1.13g with keyboard attached). 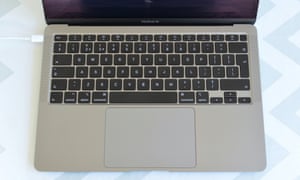 The new Magic Keyboard should relegate the issues of the butterfly keyboard to the past while providing more key travel. Photograph: Samuel Gibbs/The Guardian

The important new addition is the Magic Keyboard, which is the name Apple gave to the scissor switch mechanism used in its external keyboard.

It replaces the ill-fated butterfly keyboard and should render troubles with stuck keys a thing of the past. It also has double the key travel at 1mm of depth and a far more satisfying typing experience.

The keys feel solid, depress far enough and are fairly quiet as laptop keyboards go. It is very close to being best-in-class, just behind the keyboard on Microsoft’s Surface Laptop 3.

Apple’s Force Touch trackpad continues to be the very best you can buy on a laptop. It is large, precise and smooth: all-round excellent.

A Touch ID fingerprint scanner is built into the power button in the top right corner of the keyboard. It works well as an alternative to passwords, but can only recognise three fingerprints. One day I hope Apple puts its excellent Face ID system in its laptops to match Microsoft’s excellent Windows Hello system in its computers. 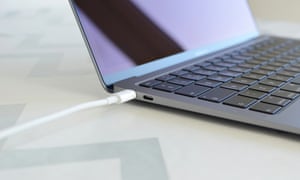 Two USB-C/Thunderbolt 3 ports in the left side handle power and input, connecting to any number of accessories, drives and displays. Photograph: Samuel Gibbs/The Guardian

The MacBook Air as tested was the base model costing £999 with an Intel Core i3 processor, 8GB of RAM and 256GB of storage.

General computing performance was surprisingly good from the Core i3 version, including when connected to a 4K display. Where it struggled was attempting to do fairly complex edits to images in Affinity Photo or perform multiple tasks at once, such as downloading app updates and using relatively complex web apps in Chrome – something I’ve not noticed with any Core i5-powered machines in the last few years.

If you’re a light computer user the Core i3 version will be perfectly adequate. But I would recommend most pay the extra £100 to upgrade to the quad-core Core i5 processor, which is far more capable and will be able to handle demanding programs and extensive multitasking, as you would expect from a computer costing £1,099.

The MacBook Air lasts about eight to nine hours of general work, including using Chrome with about 10 or so tabs open, various chat apps, Typora text editor, Affinity Photo, Apple Mail and a few other bits – enough to get a work day done without having to reach for a charger.

Worth noting in these difficult times that a 50-minute video call knocked around two hours off the usual battery life so you’ll need the charger more often.

Charging the MacBook Air with the included 30W charger took more than two hours 15 minutes, which is pretty slow for a modern laptop with some such as Microsoft’s Surface Laptop 3 hitting 80% in an hour. Using a 45W charger shaved 40 minutes off the full charge time.

The MacBook Air is one of the most sustainable laptops you can buy. Its battery is rated for 1,000 full charge cycles before diminishing to 80% capacity (most batteries are only rated for 500 charge cycles) and it can be replaced for £129 by Apple.

The computer is generally repairable too, although it was awarded only a 4 out of 10 for repairability by specialists iFixit, with downsides being the inability to upgrade the RAM or SSD.

What makes the MacBook Air stand apart is its use of recycled material, including 100% recycled aluminium in the casing, 100% recycled tin in the solder of its logic board and at least 35% recycled plastic used in multiple components. Apple is also using renewable energy for final assembly of the machine, and breaks down the computer’s environmental impact in its report. 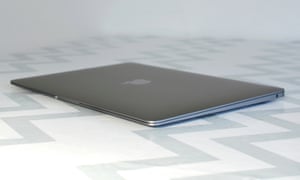 The MacBook Air ships with Apple’s latest macOS 10.15 Catalina, which continues to be a mature and well-thought-out operating system that makes the most of Apple’s laptops.

The most useful addition this time round is Sidecar, which turns an iPad into a second screen for your Mac – particularly useful if you’re stuck working from home and happen to have both a Mac and an iPad. As long as you’re on the same wifi network it works wirelessly and effortlessly, or you can use a cable.

Catalina also brought expanded app support for those built using Mac Catalyst, which helps developers take their iPad apps and port them to the Mac. Twitter’s app is one example, but good ones are thin on the ground right now.

The iTunes app has also been split into three apps: Apple TV, Music and Podcasts, which are generally better and faster. 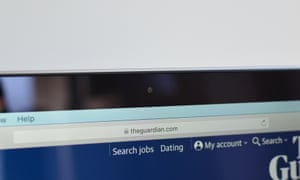 The 720p webcam is slightly disappointing, particularly compared to those fitted to the iPad Pro, smartphones and competing laptops. Photograph: Samuel Gibbs/The Guardian

The Apple MacBook Air is available in silver, space grey and gold starting at £999 with a dual-core Intel Core i3 processor, 8GB of RAM and 256GB of storage.

Changing the processor to a quad-core Intel Core i5 costs an extra £100, while the version with the Core i5 processor, 8GB of RAM and 512GB of storage costs £1,299.

Various other options are available totalling to a price of £2,249 with everything maxed out.

The 2020 MacBook Air has so many things going for it across form, function and sustainability.

Very few machines are made with any recycled material, let alone as much as the MacBook Air. There is still some way to go to truly reduce the impact of consumer electronics on the environment, but Apple should be commended for pushing the industry forward in a similar manner to the Fairphone project.

In form and function the MacBook Air is just a few shades short of the perfect traditional laptop. If you don’t want a more modern convertible, you’ll struggle to find a better consumer machine than this.

The keyboard is finally as great as the trackpad, the battery lasts long enough for a work day, it’s light but strong and the screen is beautiful, while the little things such as Touch ID work great. You also get two Thunderbolt 3 ports and a long support life.

Sure, the screen could have smaller bezels and the webcam could be better – why Apple hasn’t put its excellent Face ID into its laptops I have no idea. You can’t upgrade the RAM or storage after purchase, there’s no wifi 6 support, nor SD card slot or USB-A port, but by now most will have enough USB-C cables and accessories, and if not, now is the time to buy them.

If you’re looking for an Apple laptop, this is the one to buy unless you need a beast such as the 16in MacBook Pro. Just spend the extra £100 and buy the MacBook Air with the Intel Core i5 processor, rather than the Core i3, at £1,099.

Cons: average webcam, no wifi 6, no SD or USB-A, expensive 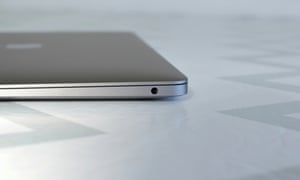 The headphones socket remains, something that has long gone from phones and high-end tablets and now seems destined to go from laptops. Photograph: Samuel Gibbs/The Guardian