The biggest, most expensive new smartphone from Apple is the iPhone 11 Pro Max, and you’ll need a small fortune to buy it.

It has the exact same aluminium and glass design, the same notched screen with Face ID, the same camera arrangement on the back and the same Lightning port in the bottom. It is the same phone. Except that enlarging everything (apart from thickness) by 10%-12% creates a very different experience. 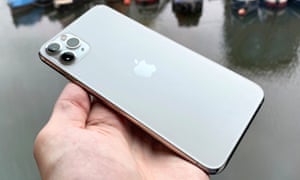 The frosted white back of the silver iPhone 11 Pro Max is the nicest of all the available colours. Photograph: Samuel Gibbs/The Guardian

Like the iPhone XS Max it replaces, the iPhone 11 Pro Max is really difficult to use with one hand. At 77.8mm it is hand-stretchingly wide, wider still than the already massive OnePlus 7 Pro (75.9mm) and even the positively gigantic Samsung Galaxy Note 10+ (75.9mm), and at 226g it is heavier than competitors by a full 20g. But more than that, the rounded stainless steel sides provide no grip at all, meaning your fingers simply slip off them when you stretch across to reach the other side of the screen or the top left corner, which you frequently need to do in iOS.

It’s a combination that either results in hand pain or wallet pain, as it slips out of your fingers and plummets on to the unforgiving floor below. You then stick it in a case, which makes it even bigger. If there was ever a phone to benefit from a grip accessory of some kind, this is it.

So unless you have giant hands, the iPhone 11 Pro Max is exclusively a two-handed phone. But I’d argue that there are always times when you need to use a phone one-handed: public transport, carrying a bag, taking a selfie and so on.

The 6.5in Super Retina XDR “Pro level” OLED screen is just as wonderful as the one on the smaller iPhone 11 Pro, although it isn’t a massive leap over that fitted to significantly cheaper rivals such as the OnePlus 7 Pro. Flip it over and the frosted, almost metallic-like glass and square camera lump with three lenses poking out is new. 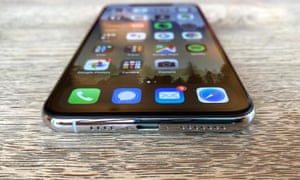 The Lightning port works fine for charging, but it’s disappointing not to see USB-C at this point. Photograph: Samuel Gibbs/The Guardian

The iPhone 11 Pro Max has the same A13 Bionic chip, 4GB of RAM and at least 64GB of storage as the rest of the iPhone 11 line, and performs similarly. Everything happens promptly, including intensive tasks such as video editing and gaming, and it should be a top performer for years to come.

The use of Lightning over the newer, more adaptable and useful USB-C is disappointing, as is the 64GB of starting storage. If you want to use your massive phone screen to watch video or play games, or you shoot any number of photos or 4K videos, you’re going to fill that up in no time.

Apple says it has managed to make the iPhone 11 Pro last five hours longer between charges than the iPhone XS Max, which managed 27 hours in my testing.

The iPhone 11 Pro Max beats that estimate by some margin, lasting just minutes shy of a full 48 hours between charges. That means the phone lasts from 7am on day one until about 6.50am on day three, propelling the iPhone 11 Pro Max into the two-day battery club previously only populated by a variety of Huawei’s top phones.

That was after the iOS 13.1.2 update, while using it as my primary device without a smartwatch attached, sending and receiving 100 emails and messages, 80 push notifications, listening to five hours of music on Bluetooth headphones, watching an hour of Netflix, and shooting about 10 photos a day.

The phone also gets pretty hot when fast charging. It can wirelessly charge too, but can’t charge other devices.

It’s also worth noting that iOS 13 includes a battery optimisation feature, which is designed to learn your habits and only charge the battery past 80% when it thinks you need it to extend its longevity. 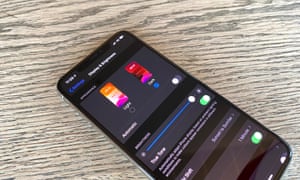 The iPhone 11 Pro shipped with iOS 13 but was quickly updated three times to iOS 13.1.2, following the same issues suffered with the iPhone 11.

The iPhone 11 Pro Max also has a few additions for the large screen such as a split-screen view in Mail, Calendar, Messages and others that aren’t present on the smaller iPhone 11 Pro. It also supports a few tricks to help with one-handed use such as bringing the top of the screen down or moving the keyboard to one of the sides, which itself is difficult to do with your right hand as the button to activate it is in the bottom left corner of the screen.

It’s the back gesture, which is a swipe in from the left edge of the screen, that’s a killer for a right-handed user. Trying to do that with one hand is equal parts frustration and dread.

Apple leads the industry in software updates, providing at least five years of support from release, where other manufacturers cap out at about three years, and has recently shown a surprising ability to rapidly push out bug fix updates in quick succession. 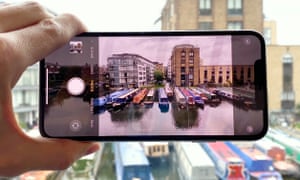 The new triple camera system is a massive step up for Apple’s smartphones, finally matching or exceeding the best of the rest in photography. Photograph: Samuel Gibbs/The Guardian

The iPhone 11 Pro Max has Apple’s new triple 12-megapixel camera setup – the same as the smaller iPhone 11 Pro. The combination of ultrawide, wide and telephoto cameras gives you the ability to shoot at 0.5x, 1x or 2x optical zoom, then up to 10x digital zoom.

Overall, it’s a massive step up on previous iPhone cameras, and better still than the cheaper iPhone 11. Apple’s new night mode brings it up to par with the best rivals on very low-light photography, while the new deep fusion technology rolling out with iOS 13.2 is getting closer than ever to the clarity of fine detail of an SLR with a large lens.

The photos used for this review were all shot on an iPhone 11 Pro running iOS 13.2 beta.

After lagging the ultra-competitive camera competition for some time, Apple is firmly up with the best with the iPhone 11 Pro line. 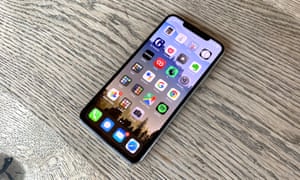 The iPhone 11 Pro Max is great for watching video, but its 226g weight can be quite wearing when trying to hold it one-handed through even just a TV show. Photograph: Samuel Gibbs/The Guardian

There’s an excellent super-sized smartphone within Apple’s grasp, but unfortunately the iPhone 11 Pro Max isn’t it.

A design that works at the much smaller size of the 5.8in iPhone 11 Pro simply doesn’t at the gargantuan 6.5in iPhone 11 Pro Max, meaning Apple’s biggest phone suffers from terrible ergonomics.

I get that uniformity is Apple’s schtick, but in this case it actively makes the product worse. Of all the massive phones I’ve used across the years, the heavy, slippery iPhone 11 Pro Max and iPhone XS Max before it are the only ones to give me serious hand pain. It’s literally a crying shame, because everything else about it – from the camera, the screen and the performance – is great.

When it comes down to it, only the genuinely epic Huawei-level battery life salvages the iPhone 11 Pro Max from being a three-star product, and even then this is a four-star phone that is extremely expensive.

There are certainly better, easier-to-use big-screen smartphones available that cost significantly less than the jaw-dropping £1,149 and up Apple wants for the iPhone 11 Pro Max.

But if you must have an iPhone and the wonderful 5.8in iPhone 11 Pro doesn’t quite cut it, do yourself a favour and save £420 and buy the 6.1in iPhone 11. Only those that genuinely need two-day battery life should buy the iPhone 11 Pro Max, and even then I wouldn’t. 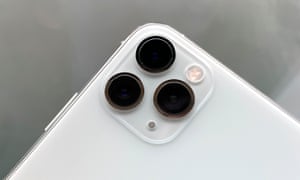 The group of three cameras work together to given you more options, but the main 1x shooter is still the best. Photograph: Samuel Gibbs/The Guardian

MIT is reviewing its relationship with AI startup SenseTime, one of the Chinese tech firms blacklisted by the U.S.