Are you a techie who knows how to write? Then join our Team! Especially English native speakers welcome!

RAVPower has released the PD Pioneer GaN Tech USB C Wall Charger series in SKUs of various charging rates, 30, 61, 65 and 90 watts (W) included. These specs may have been chosen to appeal to Apple fans who perhaps have both phones and laptops of that OEM’s ecosystem. However, these power bricks also feature the Power Delivery (USB-PD, which may explain the PD in their name) standard, thus offering the voltage/amperage profile required by devices of many other provenances.

This hands-on concerns a selection of these RAVPower accessories: 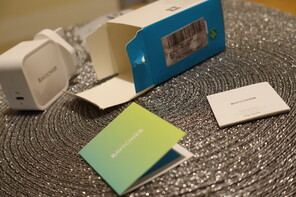 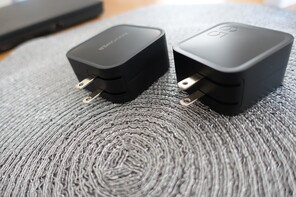 The 65W and 90W SKUs arrived to this reviewer as US-type adapters, whereas the 61W is a UK- and Ireland-compatible charger. It is in RAVPower’s white colorway, whereas the other 2 are a shade of matte black. This reviewer prefers the latter on a subjective basis, although they are slightly prone to attracting fingerprints. 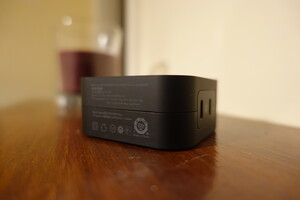 The RP-PC133 also has an inlaid “65” on one side of its chassis; unfortunately, it is the only one to feature this pleasant and informative little accent. 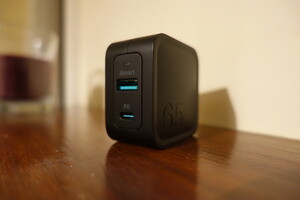 All 3 power bricks also feature a bright blue power light and pale greenish-blue ports (a color scheme echoed in their packaging). They amount to a nice effect with either main color. The 90W option also arrived with a RAVPower-branded USB type C to C cable in the box. 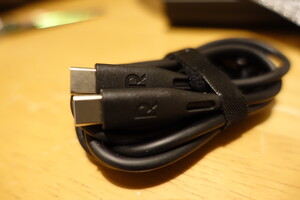 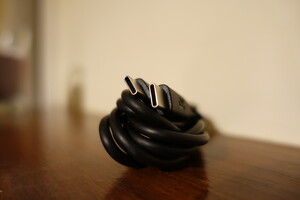 It is appreciably long at 2 meters, gives the impression of being high-quality and – possibly most importantly – has a handy velcro tie. On the other hand, it is not braided – unlike, say, the type C end of that of the late 2019 (GTX 1650) Razer Blade Stealth.

That brings us neatly to what will be the RAVPower products’ greatest challenge in this reviewer’s house. Being as it is in an Apple-free abode, the 100W-capable ultrabook may be best equipped to push all their specs to their utmost. 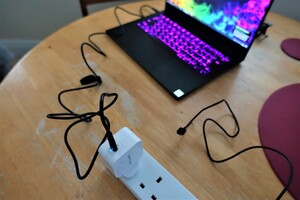 This PC exhibits a “More Power Required” message when plugged in using either power brick, as it would with anything but its own 100W charger, which (according to the OEM, at least) is required for intensive tasks. Therefore, the use of any of these accessories, as with any non-standard charger you might try with this machine, most likely means no gaming for you.

Nevertheless, the fact that either of these virtually pocketable accessories – even the 90W option measures 2.5 x 2.5 x 1.2 inches – can charge one of 2019’s most powerful ultrabooks to any degree is impressive.

On that note, this brick was able to fully charge the Razer (using the same Wi-Fi connection, conventional CPU settings and an average daily task-load) in 1 hour and 30 minutes, whereas its default power supply does so in 1 hour and 23 minutes.

The 61W SKU manages the same in 2 hours and 28 minutes, whereas the 65W option manages it in 2 hours and 23 minutes using its USB type C port. These are impressive figures in the relatively short-term window of this hands-on: time would tell if they could maintain this performance in the future.

A handy Samsung Galaxy Note 10+ should also be extremely compatible with the accessories…in theory. However, there is also a OnePlus 3, a phone that remains in a semi-daily-driver role not the least because of its well-sustained ability to charge by 80% in about 50 minutes with its in-house power brick. How will this record hold up against the newer RAVPower wall-warts?

Well, the answer is not as may be expected. All 3 of these devices charge, as noted above, at a variety of standard PD rates. The OnePlus, on the other hand, adheres to an atypical, in-house 5V/4A system (or, according to eBay’s finest (all right, newest) USB type C-enabled multimeter, about 4V/3.5A on a regular basis – which, given factors such as power draw, the sockets or extension leads used and the power grid in this area, is a reasonable variation).

Therefore, when connected to different chargers, it defaults to a rate of about 3-4V/1-1.5A, which raised charging times to well over an hour in each case. This held true even in the case of the 90W charger, whose 20V/4.5A setting could conceivably have handled it – in theory.

This is influenced by a range of factors, the most prominent of which, is, again, probably the proprietary charging technology. The lesson here is that phones from OEMs who develop their own fast-charging standard cannot power up at the speeds advertised with third-party bricks or cables, even ones with fancy GaN specs such as these RAVPowers. Thanks, OnePlus.

What about devices with standard power profiles? With the exception of the 90W SKU, the PD Pioneer series were found to be able to charge the Galaxy Note 10+ at the same approximate peak rate (~8.9V/2A, or about 18W) of its own 25W power brick. The phablet responded in the same way while using either its own USB C to C cable or the RAVPower one.

This part of the reviewer’s package was found to function adequately in comparison with other pre-existing wires – with an odd exception in which it refused to charge this reviewer’s daily-driven wireless neckbuds. They are the first-gen Bullets Wireless from (yet again) OnePlus, which have never failed to charge with any other cable prior to this. Reaching out to this OEM with the issue has yet to result in any clarification.

On this note, the 61W and 90W bricks are obviously more suited to newer tech. The 65W version, on the other hand, is the only one that would be compatible with those products with. say, microUSB ports.

An older Sony RX100 charges happily away with the 65W accessory.

In addition, this port had no problem with the OnePlus neckbuds and their own cable). Again, it does so at the rate best suited to the device in question, possibly thanks to its iSmart technology.

The PD Pioneer series may be most attractive to consumers for its GaN status. This charging technology is often linked to relatively reduced temperatures while in use. From what this reviewer has seen, this is quite true, and also finally affords a chance for an impulse-bought FLIR One Pro to leap into actual legitimate action.

It shows that the standard power bricks and transformers around the house are reproducibly capable of reaching levels in the 35-40⁰C range, whereas the RAVPower accessories typically stay at up to 10⁰C colder. The only exception is when they are connected to the Blade Stealth, which, given the high draw and protracted charging times involved, might be acceptable. 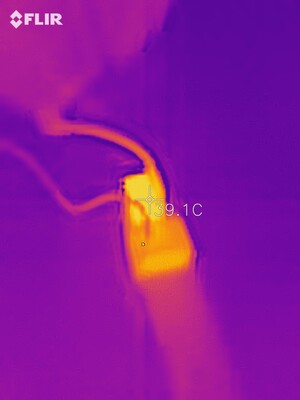 A 20W charger (top) compared to the 61W RAVPower brick after a 1-hour charging session. 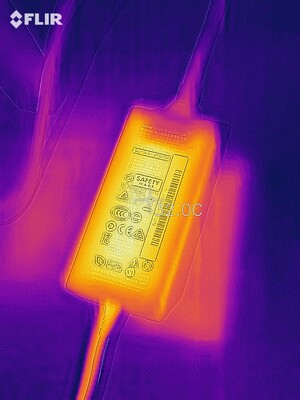 …compared to the 90W RAVPower after the same.

The RAVPower PD Pioneer series may be of interest to users with modern-day charging needs in a compact form-factor. Their main draw may be in the ability to power even some newer ultrabooks in a pinch while being around the same size as the average smartphone wall-wart. (Then again, the temperatures reached by the 90W SKU while doing so is a hint that this should perhaps not be an everyday feat for these products.)

Therefore, it can be said that these GaN-powered accessories are viable and versatile accessories. The 65W (RP-PC133) option, however, might be of the greatest use to those with a mix of older and newer tech.

This is an important factor to consider while shopping for one of these accessories: this SKU has a normal price of US$47.99, whereas the 61W option is $39.99. Its 90W counterpart, on the other hand, is a more substantial investment at $65.99 (correct at time of writing).

Nevertheless, their prices may strike one as high for a charging accessory, even a high-tech one – however, for contrast, even Apple’s in-house 30W charger is set at $49.99, whereas its 96W counterpart is no less than $79.99.

Furthermore, Samsung’s 45W charger sets the user back $49.99, whereas its standard 25W brick would be $34.99. A replacement Razer 100W charger, on the other hand, costs US$99.99. On the other hand, the number of players in this same GaN-empowered space is growing, and offer some very cost-effective alternatives. However, having not tested these competitor products, this reviewer can’t speak to their efficacy.

However, the function and reliability (with the exception of the ‘neckbud’ incident) of the RAVPower bricks under consideration here have been verified. Therefore, these bricks could be recommended as versatile travel chargers (presuming that use-case comes up again soon) or perhaps as replacement bricks for those who value quality and brand-recognition in their power accessories.

Walmart buys 740,000 Samsung Galaxy XCover Pros for use in its stores in the US