Home sweet…augh. Yes, even as someone who’s worked from home for almost a decade and a half, having to stay indoors is starting to drive me up the wall.

Thank goodness for technology. It’s a lot harder to imagine what we all would have been doing with all this free time in an era before the internet: probably watching a lot of terrible cable TV and maybe, I don’t know, reading books.

Chief among the many technologies that Apple brings to the table in our socially distant present is FaceTime: it’s great for catching up with family, friends, and other loved ones in these trying times. Though the feature was a revelation when Apple added it back in the iPhone 4, video chatting has become old hat these days—though recently it’s been getting quite the workout.

[ Further reading: Everything you need to know about iOS 13 ]

With all the attention on FaceTime, and what I’d wager is unprecedented usage of the feature, its shortcomings have started to become painfully evident. As good as it is, there’s definitely room for improvement.

Stand in the place where you live

It took Apple a surprisingly long time to add multi-party video chatting to FaceTime. Though the original one-on-one video chat was first introduced in 2010, it wasn’t until 2018 that the company finally added group chat capabilities. And, in typical Apple fashion, it overshot the mark—no limit of four or five people here: you could have a group FaceTime chat with up to 32.

In order to combat the problem of how you display 32 people on a single screen, Apple tried an innovative approach with a variety of little windows, which will grow larger and take focus when the person in them is speaking.

In theory, that might work well, but when you have a family that likes to talk (and, more significantly, interrupt each other) as much as I do, you quickly find out that it’s less than practical, as the windows constantly resize, in worse cases inducing nausea or, at least, just becoming annoying.

Say what you will for the boring nature of a standard grid layout, but it certainly has simplicity going for it. It would be a welcome update for Apple to add at least an option for a standard static grid, and the queasier among us would certainly thank them.

As long as we’re on the topic of group FaceTime calls, they could stand a little bit of beefing up. Until these past few weeks, I doubt many people actually spent a lot of time using the multiparty option, but now it’s being stacked up against other tools, such as Zoom, Skype, and HouseParty, all of which offer lots of additional features on top of what FaceTime does. 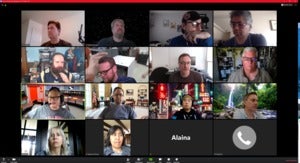 Third-party applications like Zoom (above) often have the functionality not found in FaceTime. But since FaceTime is built-in, it would be nice if it had a little more than a bare-bones feature set.

Maybe Apple’s happy with that, providing the bare bones options and letting those who need additional functionality go to third-party apps. But FaceTime still has that difficult to overcome advantage of being the built-in and integrated option for all users of Apple’s platforms, so it wouldn’t go amiss to offer some basic features like, say, the ability to share your screen, or send files back and forth. Sure, you can do those things in Messages, but full integration between the two would be helpful; right now, you can easily make a FaceTime call to one of your group chats in Messages, but you can’t easily go the other way around.

And, as entertaining as Animoji and Memoji are, it would be nice to see some other forms of entertainment sharing, whether it be playing simple games, sharing a song, or being able to watch a TV show together. Again, third-party services can fill many of these gaps, but adding a little bit extra to FaceTime certainly helps lower the barrier to entry for those newer to video chatting.

Way back when Steve Jobs first introduced it on stage, he said that the company intended to open source the FaceTime protocol (a surprise, I have heard, even to those who worked on it). But that future never materialized, something that’s largely been chalked up to intellectual property challenges.

FaceTime is Apple’s protocol, I get it. Still, in theory it could make a FaceTime client for other platforms, such as Android or Windows. This is one place that Apple definitely looks regressive compared to its competition. Yes, it’s wonderful if my whole family and all of my friends use Apple devices, but let’s not kid ourselves: there are always going to be some who don’t. Rather than leaving them out of the fun, it would be wise to have a way to bring them into the fold.

Frankly, FaceTime isn’t a competitive advantage anymore. It’s great and all, but in this day and age, video chatting is table stakes: a feature that users expect to have. Making it available across various platforms would go a long way to delighting your customers, who then won’t have to navigate some other third-party service just to talk to that one cousin with an Android phone. And hey, maybe just maybe, it’ll be so easy they’ll convince the person on the other end of the line to consider picking up an Apple device.

Note: When you purchase something after clicking links in our articles, we may earn a small commission. Read our affiliate link policy for more details.
0 2
Share FacebookTwitterGoogle+ReddItWhatsAppPinterestEmail

Samsung, not Apple, is leading the next exciting phone industry change